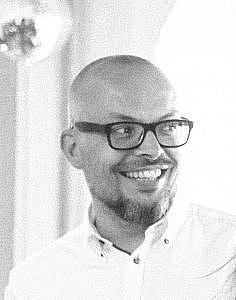 Morten is a Pathfinder on a mission – rethinking technology through creativity. He explores and combines technology and processes, to build meaningful experiences. He is the founding manager of IdemoLab – a design team for hardware innovation – and a founding member of  “Dansk Modular”, a Copenhagen-based group of modular synthesizer artists.”

I worked as a programmer when I was 14, and later as a musician and composer – all the while I should have been studying. Surprisingly, though, I still graduated from the University of Copenhagen with a masters degree in Computer Science and Cognitive Psychology in the late 90s and base much of my work on combinations of insights from different domains.

As such, I think that doing without dreaming gets you nowhere and I aspire to be one of “The dreamers who must do what they dream, The doers who must dream what they do.” (William B. Yeats).

Interview in the Danish “work.flow” podcast, where I talk about prototyping, design methodologies – and modular synthesizers!

Interview in the Danish ComputerWorld, where I talk about IoT, hiring talent and digitalization.

Podcast (mostly about synthesizers, but also about hardware and technology) in Danish Radio4.

And my LinkedIn profile.