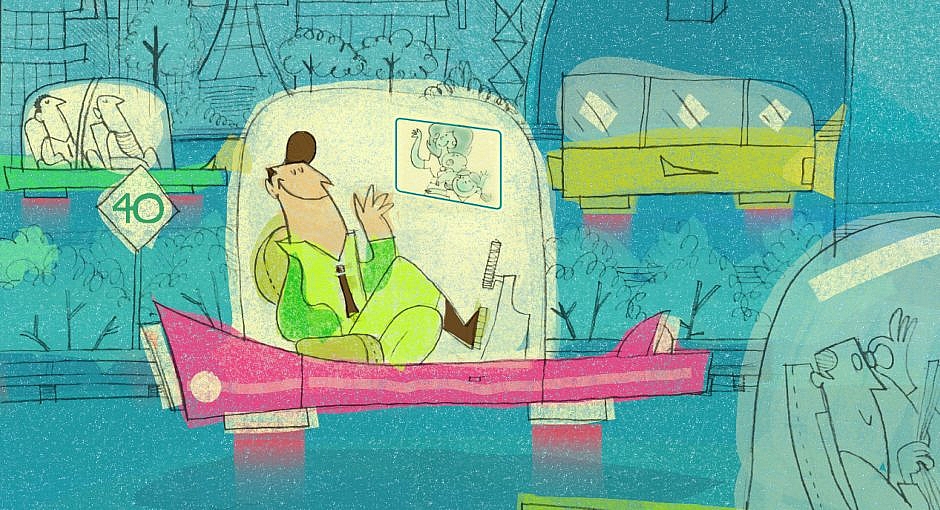 I’m writing this to you, from the front seat of a beat-up, old Volvo XSD21. Luckily, it’s taking care of the driving, because traffic is terrible here. I’m a little outside Copenhagen, on my way to the airport. Traffic has always been awful here – but now I see drivers talking on the phone, putting on makeup, writing emails or plain sleeping and everybody seems a little less stressed than they would have been 20 years ago. Except, of course, that guy in the oversized BMW two lanes over, who glares angrily at everybody around him. I guess no amount of zen-inducing technology will help people like him.

The Volvo just told me that it heard from the other cars on the road, that I can expect to be “unloaded” at the airport 45 minutes, so I still have plenty of time. Unless something crazy happens on the road: Have you heard about the recent “urban traffic-terrorists”? They steal mannequins from stores and place them curbside on the street, thereby forcing every automated car to slow down or stop. In some ways, I like the civil disobedience part of it. But I hope a few updates of the car-AI’s will soon take care of that obstruction – just like they did with the entrepreneurial, but sleazy, uses of driverless cars as one-hour hotel-rooms in the former red-light district of Hamburg a couple of years ago.

Do you have wireless charging pods by now, by the way? These huge fields close to the freeway, just outside of the city, are now getting wireless parking-charging. They are pretty huge – and not pretty – these fields “where automated cars go to recharge after a long day on the road” (also, being completely automated, they are becoming a target for vandalism by bored youth).

We’ve always had a problem with parking in our small city. Now, we don’t have any parking in our city. People who want their car nearby, are using the expensive parking lots just outside the inner-city. But, hey, I can wait more than 1 minute on a car, so after being a family with two cars, we’ve been a happy family with no cars at all for six years now…

I’m getting closer to the airport now – the line of “no-seat” parcel transporters from DHL, UPS, etc. is getting denser.  I wonder what the large logistic centers of yesteryear are now being used for. Packages are now being sorted automatically and are being picked up and delivered directly at your home or office.

Anything can go anywhere – fast, cheap and safe. Truly, we only leave our places of dwelling for either leisure or face-to-face. Somehow, though, I feel we get a little bit more isolated for each new driverless car out there…