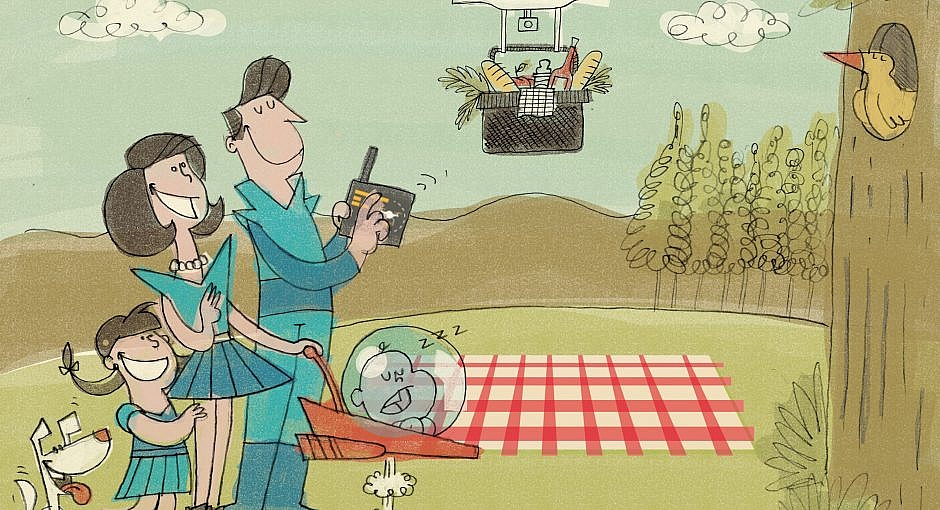 On the future buzz of drones

Hopefully, everything is going well with your new job? I saw a video-drone (you know, the ones with the updated high-resolution spherical display) at the mall yesterday, running one of your company’s commercials. Hopefully, it’ll be a successful campaign for you — although, I must admit, those “fly-by commercials” annoy the hell out of me. Whatever happened to those good old-fashioned youtube commercials? Probably the same as what happened to YouTube after the FB buyout…

I was thinking about annoying drones in general. Back in the 10’s, swarms of small drones were all the rage. Though a fascinating and exciting mathematical exercise, I never did understand the implications. It’s still only a party-trick for concerts, big ballgames and the like. Your mothers FollowDrone, on the other hand, has been extremely useful, though. Waterproof and embedded in her Kayak until she puts the kayak in the water, it still performs very nicely, keeping track of and communicating with her when she is out doing her long morning treks. Last week, when the door lost contact with the ‘net and wouldn’t let me in, I’d have been standing in the rain for hours if I hadn’t been able to have her FollowDrone relay my message of distress. Oh — and then there is the safety thing, of course. It’s a bit like having your own eye-in-the-sky. Like the highway drones, which lives in light poles and provides inch-tight surveillance of the streets. The FollowDrone is just a personal one for your kayak.

I’ve been meaning to check out the attic — your mother still insists she hears strange sounds from up there. Like tip-tapping of small feet. She suspects its a mouse. So, I bought myself two crawler-bots from Home Depot, added infrared sensing and asked the Google AI to keep an eye out for small rodents. Living, preferably. The new crawlers should be able to navigate even my mess — and with suction, they can even climb up on small boxes. I put one in the attic and placed one down in the basement as well, for good measure. Apart from figuring out if we have any uninvited houseguest, I also want to get an updated inventory of all our stuff (and the occasional interesting “UnIdentified Object” alert from the GoogleAI). It’s been a couple of years since we had your uncle’s scanbot over the last time. Hopefully, my new crawlers won’t be attacked and thrashed around by the neighbor’s cat, which still roams around the house at times — seemingly unaware of any of our other small houseguests. If we don’t find anything else, I hope the bots can spot my old vintage cassette-deck from the 80 ’s that I KNOW is around here somewhere. After 50 years, it would be interesting to see if I can get it up and running again.

Speaking of music, I heard you asked for your old vintage Skrillex albums — you can come by any time to pick them up — or I can put them in a bin for pickup by ShareDrone. I have plenty of credits left — and I guess your landlord has cleaned up your buildings’ drone-shelf by now, so you don’t have to pick up stuff at the central? Let me know…